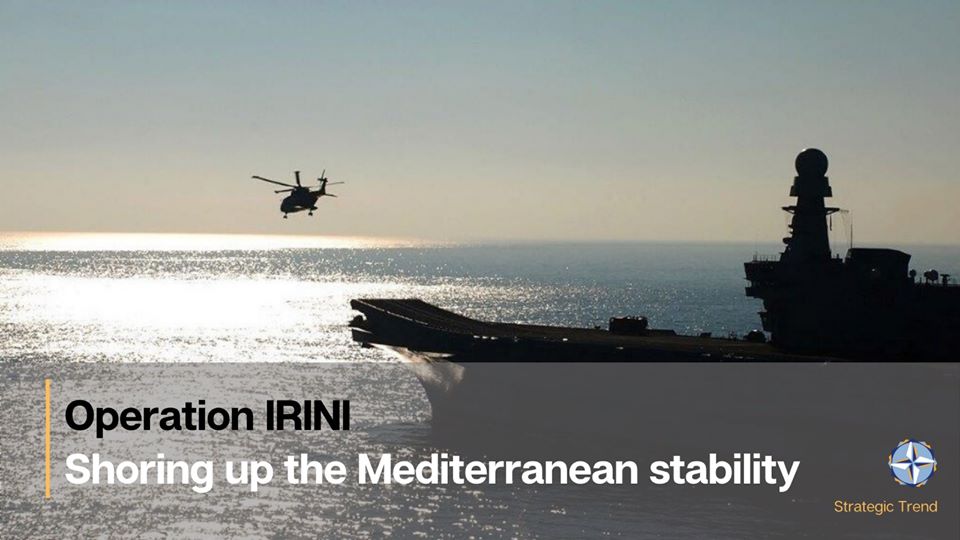 EUNAVFOR MED SOPHIA was born primarily from the need to fight human trafficking in the Mediterranean. IRINI will have as its core task the implementation of the UN arms embargo through the use of aerial, satellite and maritime assets. In particular the mission will be able to carry out inspections of vessels on the high seas off the coast of Libya suspected to be carrying arms or related material to and from Libya in accordance with United Nations Security Council Resolution 2292 (2016) and as secondary tasks it will also:

The operation must take a balanced attitude between the opposing factions and will operate in such a way as not to constitute a pull factor for the migration phenomenon. IRINI will represent a first tangible sign of a rediscovered centrality of European countries, that have their own responsibilities, in the management of the Libyan dossier.

The Libyan conflict has seen an escalation that increasingly sees the two main factions: the UN-recognised Government of National Agreement (GNA) of Tripoli, led by Fayez al-Sarraj and supported by Turkey and Qatar; and the Forces of the Libyan National Army (LNA) led by General Khalifa Haftar, supported in economic terms, arms aid and men on the ground by Russia, Egypt, Jordan, United Arab Emirates.

Both sides have received weapons from abroad in violation of the 2011 United Nations arms embargo on Libya, but no country has been sanctioned for this. According to the latest Stockholm International Peace Research Institute, in 2019 the GNA received an unknown number of armoured vehicles and armed unmanned aerial vehicles (UAVs) from Turkey.

From 2015 to 2019, the LNA received armoured vehicles from Jordan and the United Arab Emirates (UAE), combat helicopters from Belarus, supplied via the UAE, and combat aircraft from Egypt. Combat aircraft and armed UAVs originating from the UAE have been used in the fighting, including in 2019. It is unclear whether they are being operated by the UAE or whether the UAE has supplied them to the LNA.

The arms transfer towards Libya confirm the necessity to have a naval presence, and not only, in the Mediterranean Sea, to give full implementation of the embargo. Thanks to Greece, one of the most controversial and debated points i.e. the disembarkation of rescued migrants. Due to the COVID-19 emergency, the Italian government was unable to provide safe ports, therefore migrants, will be sent to Greece and then redistributed on a voluntary basis at European level.

Greece’s decision will probably increase the Athen’s role in the Mediterranean Sea and at the same time, it sems to be a response to Turkish assertiveness and to the agreement with the GNA in the delimitation of exclusive economic zones (EEZ), that however is not recognized by various European institutions and especially by countries such as Italy and Greece.

Matteo Bressan – Teacher at the Italian Society for the International Organisation, he is author of various books concerning terrorism and focused on Eurasia geopolitics, jihadism and hybrid wars. International relations professor at LUMSA University.